Writing daily reviews certainly helps my writing but, man, is it constricting. Instead, here’s my thoughts on the past week of anime. An all-in-one, no holds barred smorgasbord of everything you need to hear.

Top 5 so far (not counting continuing because that’s way too hard!):

Favorite Episode: New Game!! – This Is Just Turning into Cos-purr-lay!

Oh, man. You know the episode is going to be a good one when there’s a pun in the title and the return of the man, the myth, the legend: Dandy Max.

Eagle Jump is back and the game has been decided. This time, it’s an action-dungeon game. The catch is you absorb powers/characteristics from enemies on each level.

The reason this episode is brilliant is the change in tone. Compared to the rainbows and sunshine of season one, it looks like we’ll finally get to see some of the heavier issues in the realm of professional creators. Like, competitiveness and rejection.

We DO get to see Aoba in an adorable dog, cow, and cat cos-purr-lay (don’t judge me, they used it first) so the serious to cute ratio is still well maintained. Plus, that roof scene with Rin and Yagami? Woof, woof. It should be called the ruff scene. I could hardly udder a sound the whole time. I’m sorry, I’ll stop now.

It’s exciting to see the range of mentalities so far. We have Hajime, happy-go-lucky as always, vs the easily irritable Yagami and then Aoba, the idealist, against the more realistic Yun.

The way we saw Hajime repeatedly submit proposals, gets rejected, and come back stronger in the first episode is very different from Yagami’s irritation. Similarly, Aoba attempts to persevere despite knowing she only has a 1% chance to win while Yun is unable to get motivated when the odds are overwhelmingly not in her favor. 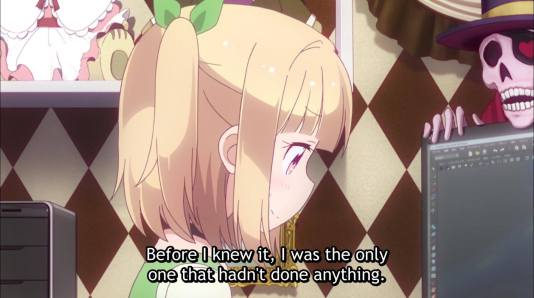 Oh, Yun. I know your pain. Hang in there!

In the end, this episode teaches us two things. We never stop learning and teamwork makes the dream work. Even with all of her experience, Yagami falls into the trap of narrow-mindedness as her designs are just mirroring the theme of ‘Fairies Story’. On the other hand, Aoba is pushing out new ideas but her execution leaves something to be desired. Though, the first designs she based on her sleeping bag are pretty cute. Overcoming their flaws by using each other as support, Yagami and Aoba put out designs that end up being chosen for the new game.

Toss in a sparkly high-five between the two and you got yourself a great episode.

Ultimately, I’m happy this only lasted a single episode. As an introduction to possibly more mature themes later in the season, or even as a one-time thing, I’m excited to see what comes next.

Best Moment: Ayanokouji revealing he is potentially a genius in mind and body.

I’ll admit it. This totally satisfied the entertainment side of my brain. Is it odd that he can do all of that and has kept it hidden? Well, sure. That doesn’t make it any less cool though. Apparently, all of his grades are exactly 50 and he’s a combat expert. From learning calligraphy and piano. That’s all coincidence according to him though.

It was a bit worrying that the student council president was not only about to 8-trigam 64-palm his sister but also didn’t have any hesitation about attacking another student, but we’ll put that aside for now. If there are more moments like this, maybe the show will be more enjoyable than I originally anticipated.

I knew he was drastically changing so, when this most recent episode highlighted just how far he’d come, my fondness of him reached new heights. From despising his father, refusing to use half of his powers, and suffering trauma at the thought of his mother you really get a glimpse into where Todoroki started vs where he’s ended up. 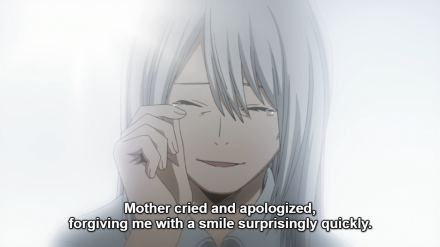 Not only does he now freely brandish the quirk from his dad, but he was willing to suck up his pride enough to intern for the man he despised because he knew it would be an invaluable experience. Flashing back to the conversation he had with his mom in the hospital, and her acceptance of who he is, it really is the icing on the cake. Sure, everyone has grown. Even Bakugo, kinda. Well, his hair is at least different now thanks to Best Jeanist.

To me though, Todoroki is leaps and bounds from where he started in both his mental and physical state. I hope we continue to see more of his transformation, and others, in the future.

Well, I think that about wraps up my impressions for the week. I’m not sure I’ll stick with these exact categories in the future, but this was a lot more fun than reviewing individual episodes. ‘Til next time!

Oh wait, I almost forgot this picture. Why does his remote control have a pair of underwear on it? Way to add details in all the wrong places. Get a shirt for it at least, you pervert!